A downloadable game for Windows, macOS, Linux, and Android

The newest version of Legacy Sisters™ remade with enhancements.

This version demonstrates a major overhaul. It contains the complete story but is still in development. The Legacy Sisters™ project could see more releases like this in stages as it progresses, so your feedback is important and appreciated in helping this project evolve!

I hope the content available thus far makes for an enjoyable playthrough as well!

The original version 1.0 made in RPG Maker is here:  https://aamp.itch.io/legacy-sisters

A visual novel like story where technology advanced so quickly that nearly everybody has a personal pet robot - but when a robot rumoured to exist in the eighties surfaces resembling a human in every way possible, things get energetic!

-Couple to a few hour read through with an ending!

I'm using an older version of the SDK so some warnings may be present on newer operating systems.

Pressing Back can cause some issues.

Look into fixing the above noted issues.

Add CGs and remaking side images.

Thank you for continuing with this project! I LOVE the changes and the game itself and it was such an enjoyable playthrough!! I played all the way through the first ending and am going to finish the entire story tomorrow.

I love the character cast a lot. They're all fun and different in their own ways. I can't decide who I like best but it's either Ampa or Nameless (I love the rocky and harsh dynamic with Nameless and Ampa and Nameless's reluctant protection and admiration for Aarel). I love all of the main characters except perhaps Bb but I'm not sure if we're supposed to like her or not anyways.

My favorite part of the game is just how creative the setup and concept is. I think its so unique and interesting to have the setup be based on the real rivalries and differences between the Big Tech companies. Some references are very clear (like Ample) and some I'm still not 100% on what firm its supposed to be referencing but I like that most references aren't obvious. (I'd love to read a guide or booklet or whatever its called where you explain all of the references for those who have finished the game! I think that would be really interesting.)

The dialogue is fun and has some great self-referential moments or subtle references to the real world. The dialogue between characters is smooth and they each give off personality. Sometimes certain lines aren't worded perfectly or are run-ons but it's sparse and minor so it's not too bad of an issue.

Visually it's so great! I've always loved the CG art and character designs and all of them look sharp here. I think Sammi's design is the best, but they are all strong. I would maybe suggest getting rid of the line on Aarel's hair as it looks like it should not be there. The improved font is amazing and definitely improves the aesthetics, and of course I LOVE the pixely character portraits, definitely makes me think of 90s or 00s VNs in such a good way. :)

I think some possible improvements down the line could be:

- Modifying the backgrounds to make them look fairly consistent with one another. Maybe change the color scheme so that they are all a consistent color scheme or add a pixelated or other filter or effect.

- I think the scene where Padi is released and they fight Notate was a little long, and some parts of the scene were a little unclear of what was going on. I think this is due to the fact that it's a lot of characters interacting at once, and a lot of events happen one after another. It ended up a mildly confusing to follow.

- I think the last scene before the credits was really confusing because it implied that it was all a dream? That's the impression I got. But we later find out that it really did happen (thank god!!!!!!!!!!!!!!!!!!). I think that it's supposed to be a either a final memory of the character's, or a scene meant to show the player an interesting event that happened before the story. I think it should be a little clearer that it was a memory.

- I'm not sure how you could do this, but I think the relationship between all of the companies could be made clearer. If you can, you might want to make the characters from each company be more representative of the company who made them, not in personality per se but in the information they have. I also had a hard time keeping track of which characters came from each company- (Nameless from Ample but made by Salaxy, Bb from PinCherry, Aatri from PinCherry and Salaxy, right? (or is it BetaWager?) and Sammi is from Salaxy but uses some BetaWager too, right?, and Aarel from PinCherry and Londonne).

Overall, so much fun! I can make some more comments here after finishing the second ending. Thank you for your continued work and I look forward to your next steps!!

Thank you for playing and thoroughly commenting. I really took your feedback on prior versions to heart in creating this one!

I'm glad Nameless is one of your favs; I had a lot of fun writing her as she was never going to originally leave the office. I got to surprise even myself by making her more essential to the cast!

I could certainly delve into more of the cryptic info of the game. Perhaps I could send that to you somehow? :) Fun little fact about the dialogue, is I didn't put the character names next to what they were saying while writing it, and tried to make their personalities unique enough to identify them just based on how they said things. Writing is definitely something I'll want to continue to work on.

Visually, there's a lot more work to be done. I'm just in the stages of deciding how to go about that but sprite revisions and colouring is on the agenda. Remaking the pixely portraits will have to be something I place careful attention to, as you've mentioned the aesthetic can be appealing here, thank you!

I haven't worked on it again since this release and will revisit it with these notes in hand for a more unbiased play through. Going through it a hundred times while testing can certainly make some things go unnoticed!

I genuinely really appreciate your thoughts on this! Thank you again ever so kindly for sharing!
Reply
tigress46 days ago

Hi! I finished the second ending yesterday. I actually really like that structure of one ending, credits, and another ending as the first arc of the story was very self-contained and was resolved well, and the second ending felt like bonus content in a good way. Kind of like the first part of the game was a series of a television show that had an arc and was resolved, and the second part of the game was a bonus movie of some sort that wrapped up the remaining loose ends.

I assume that the full version would have a good ending and a bad ending here? But I don't mind if it would just have a good ending. Maybe more than one good ending, or just different endings independently of them being good or bad? Additionally, it didn't bother me at all that this game didn't have choices as the story was interesting and well-structured enough that I didn't feel it needed it.

I would have liked to learn a little more about Aatri in this second part of the game- maybe just a little bit of info. He's either not a robot or he's Aarel's legacy brother, and it's okay if its left unconfirmed or hinted at, but I think a bit more dialogue about it would have been nice. He's the one character who was sort of forgotten at the end. I liked the reunion of all of the other characters to fight Beta though, it felt satisfying as a penultimate scene.

I tried messaging you on twitter but that was unavailable, as I really would like to learn some of the other info! I will post my email address in a reply to this message and delete it after you have seen it, so just reply here or to my email so I know when I can delete it. I don't want it out in public on itch.io forever lol. Feel free to ask me any questions you may have about my playthrough! I know how important feedback is to the creative process and I would love to be of use!

Hi, I got your email, thank you!! I'll respond better later :)

Thanks for letting me know, I will delete it now! 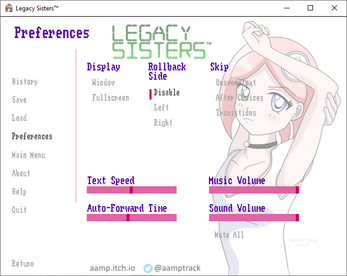 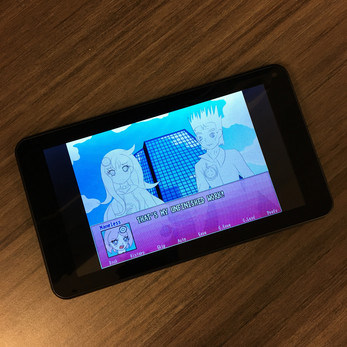 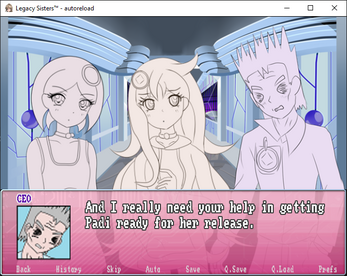 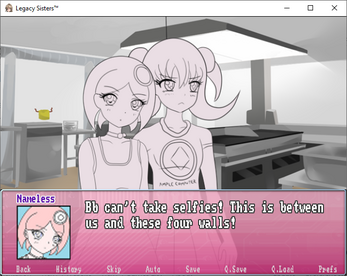 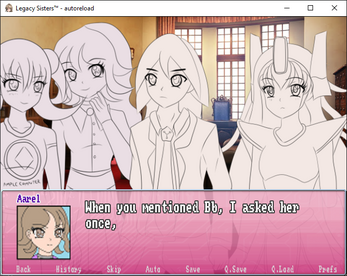